Last Friday (November 4th) an article about the Housecat project was published in the Dutch newspaper Het Parool. Read it here (PDF 1,2MB). 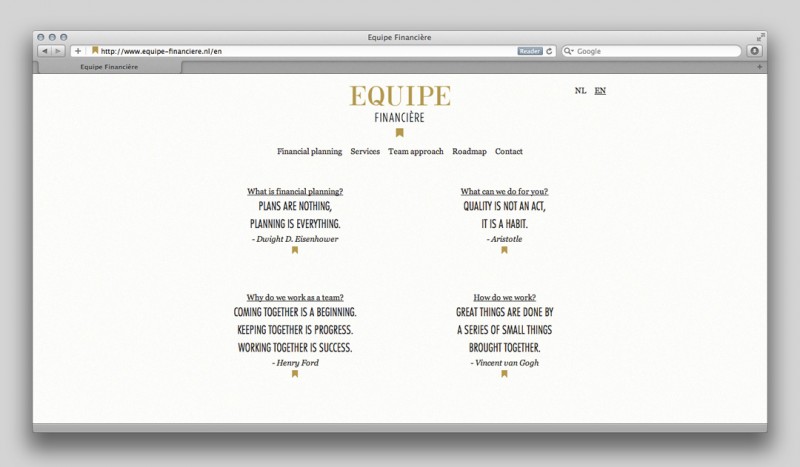 We just launched the Equipe Financière website. Besides the design we were also responsible for converting Equipe’s philosophy to informative and promoting texts for (external) online use.

Where competitors overload readers with incomprehensible details and leave them with impersonal application forms on their websites, we wanted to provide Equipe with a clear look & feel, matching the companies unique approach, and to-the-point information. Therefore we choose a ‘one-pager’ with the characteristic quotes that triggers different types of people to get in touch with Equipe Financière in person; the only way to make a team work.

All copywriting was done in collaboration with Cathalijne Gietman, web development by Iksi.
More about our previous work for Equipe Financière here.

Dutch Design Award nominee Rop van Mierlo created the marvelous Housecat poster (A1 portrait) especially for Found by James. Since this morning the poster is up for sale. Check it here!

Black & White Are Not Colors

We will participate in the exhibition ‘Black & White Are Not Colors’, a charitable event hosted by the major Dutch online design magazine Fontanel, Graphic Design Festival Breda and design studio Trapped in Suburbia.

About a hundred designers and design studios were invited to create a poster for this exhibition that celebrates ‘the power of the poster’. As a general theme, all posters revolve around contrasts with a maximum of two colours allowed on each poster – the cliché black and white had to be avoided, in fact the use of any of these non-colours was forbidden. The result, a colourful mix of work by established and up and coming designers, can be seen in The Hague.

For our poster we collaborated with the artist Ferry Bertholet. You can see our poster (plus posters from Thonik, Hoax, Urform, Joachim Baan and many more) in the Ship of Fools Gallery from October 7th till December 2nd, 2011.

James, our friend and partner in Found by James, will collaborate with Dutch Design Award nominee Rop van Mierlo on a very special project. Teaser and more info here.

Plus read James’ interview with Rop van Mierlo about the things that inspire him, his thoughts about the DDA 2011 nomination, his future plans and his dreams.

Coming Sunday, September 11th, the premiere of Orde van de Dag will take place in the Stadsschouwburg Utrecht. In this innovative theater concept Oscar Kocken & Greg Nottrot will focus on the other side of the news, supported by a variable group of interesting guest actors, writers and musicians. In the first show people like Ronald Giphart, Jibbe Willems and Nadja Hüpscher will help them out and make it a special evening. Get your tickets here!

We developed the visual identity, campaign, website and decor for Orde van de Dag. The above animation is a preview of the main decor piece of the theater show, the Orde van de Dag ‘logo table’. 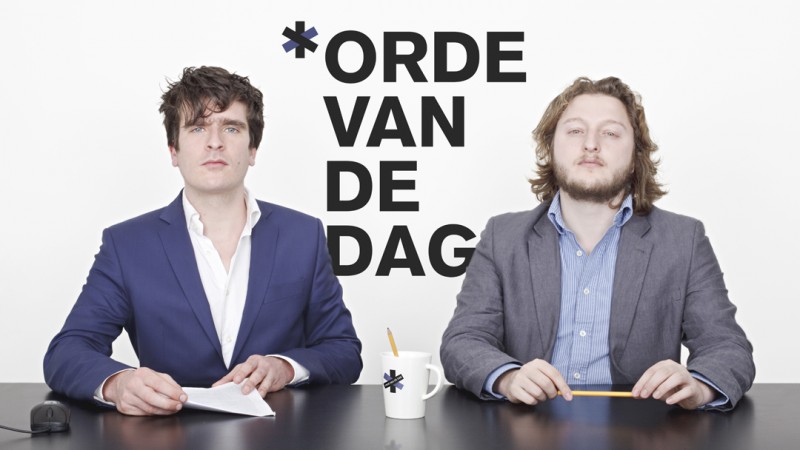 Recently we have been working on the concept for a webshop, that will be launched in 2012. Truly Yours focuses on the Dutch market and will sell bags, shoes and accessories of international contemporary designer brands.

We started from the original idea of the founder and combined it with an analysis of the current online shopping market in high-end fashion, both in The Netherlands and abroad. From this, we extracted the USP’s of the initiative and created a name that touched all of its distinctive features.

Together with a graphic designer we fine-tuned our logo sketches, worked on the visual identity of Truly Yours and the look&feel of the webshop. In this phase we have also suggested a campaign concept for the brand.

Up to the launch, there is only temporary homepage, but you can stay updated about Truly Yours and its activities via Facebook & Twitter.

For the innovative theatre concept Orde van de Dag we are responsible for the visual identity, website, campaign and decor. The monthly show premieres on September 11th 2011. Initiators Oscar Kocken en Greg Nottrot have connected an interesting group of actors, writers and directors to their initiative. In variable line-ups they will focus on the other side of the news at the Stadsschouwburg Utrecht.

We have just finished the Orde van de Dag website, together with Iksi. The website follows the initial concept and enables Oscar, Greg and the participants to playfully react on the news towards and in between the performances, and to publish highlights of the shows afterwards. Visitors of the website are invited to comment on the topics as well. You can also follow Orde van de Dag on Facebook and Twitter! 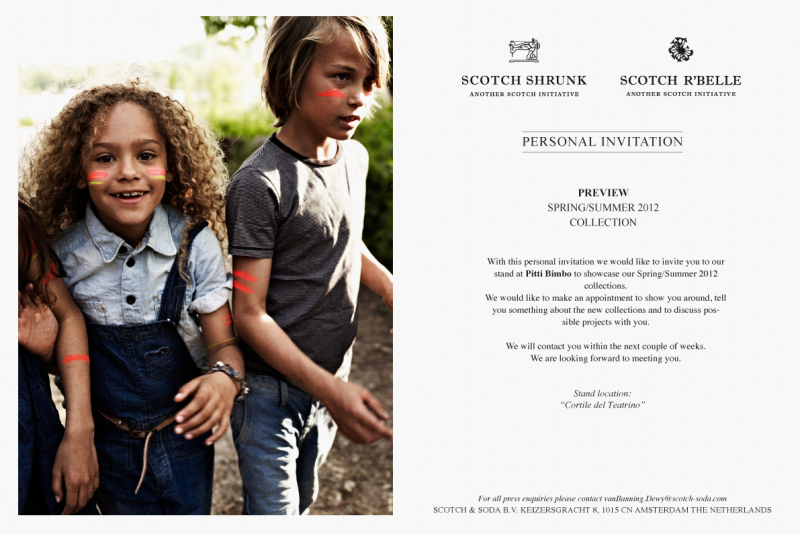 Last week the Summer ‘12 collections of Scotch Shrunk & Scotch R’Belle were presented at the Pitti Bimbo fair in Florence. Both were very well received by the international crowd of agents, buyers and press. We are proud to have also contributed to this success.